Maher pounced with the final bid to secure a half-brother to The Quarterback and ATC Derby runner-up Philippi.

Griffiths, who trains Newmarket winner The Quarterback, went to $1.3 million before Maher snaffled the powerfully-built youngster. The previous record of $750,000 was set in 2008.

Bred by Rick Jamieson, the breeder of Black Caviar, All Too Hard and Maher’s Caulfield Cup winner Jameka, the record-breaking colt will be raced by several of Maher’s owners.

“I thought he was a cracking colt obviously,” Maher said.

“Rick is a great breeder and this colt is another example of that. I saw him at the farm about six months ago and loved him then and I’m rapt to be able to get him.

“I just thought he is a real running type, the I Am Invincible’s are flying and he’s a good, tough, clean colt with a great temperament.

“We knew he’d be around the million dollars. That was my last bid and there is still a little bit left in him (for people to buy in).

“He has got a pedigree to be a stallion and hopefully that is what he will be after he’s finished winning some nice races.” 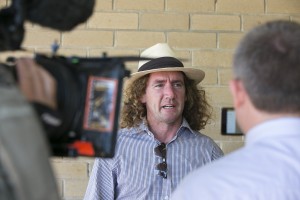 Maher was one of the active buyers on Monday, securing six purchases including a Camelot filly for $250,000.

The Quarterback caused a sensation last summer when he surprised placegetters Black Heart Bart and Chautauqua and an elite field to win Victoria’s premier sprint at Flemington. He returned again in the spring to win the Group 2 Gilgai Stakes at the same track.

Lucky Bowls Them Over In Hong Kong

It took the world’s best sprinter to deny him last time, but Australian-bred, Lucky…