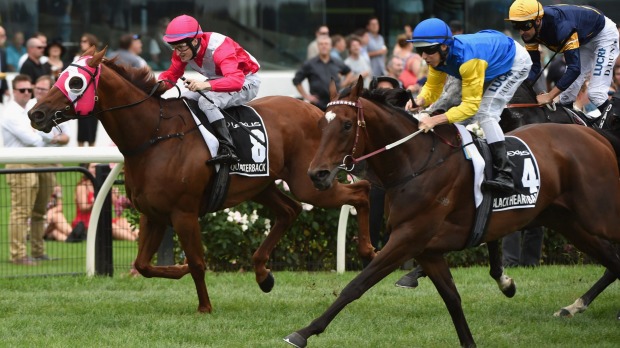 Gilgai Farm’s Rick Jamieson is either one of the luckiest breeders alive, or one of the smartest. Maybe it’s a bit of both, but what isn’t up for debate is that he’s definitely one of the most successful.

Rick will be remembered by history as the breeder of Black Caviar and that’s a feat unlikely to be topped. He laughs at the suggestion that it has to be “all downhill from here”, but the astute businessman-cum-boutique farm owner-cum-pedigree sleuth is doing a darn fine job of delaying any momentous ‘slide’.

Black Caviar aside, Jamieson can’t remember the exact number of Group winners he has bred and/or raced, but points out he only breeds around 12 to 15 foals a year.

Yet, from that band of broodmares has sprung the likes of 2015 Crown Oaks winner, Jameka, and, as of Saturday, another joined the Group One list when The Quarterback took out the Newmarket Handicap: all in the space of four months.

Jamieson’s also confident that the Mick Kent trained 4YO, Supido, will soon join that Group One list as he adds to a record which currently reads four wins and a second from just six starts.

Jamieson doesn’t offer up any tips as such, except to say that he’s been lucky (always a vital ingredient) and that’s he’s no slave to stallion fashion, believing that it mostly comes back to the mare.

Giving weight to that ‘theory’ is that Black Caviar’s sire, Bel Esprit, was still in the ‘promising’ category by the time she came along, Myboycharlie stood at just $8,800 the year Jameka was conceived, and the asking price for Street Boss was $16,500 back in 2009.

Yet, while Rick Jamieson wasn’t known to the world at large in 2009 BC, his overnight success has hardly been overnight. Sure, a lot of the study – poring over catalogue after catalogue – was done overnight hunched over a desk, but Jamieson is no Rick-come-lately.

Indeed, The Quarterback is a prime example of persistence … a play that actually originated in 1998.

It was there that Jamieson tasked Robbie Griffiths and bloodstock agent, Peter Ford, to find him a nice filly to race and later breed. They found a Brief Truce filly (subsequently named Suraya), who was knocked down for $42,500. That proved to be well worth the price given that she won a 2YO race in Melbourne and was Group Two placed in Adelaide, clearly enhancing her value as a broodmare.

Retired to stud, Soraya would produce five winners, including the stakes winner Spinning Jenny and stakes placed Philda, while her second foal, Soorena (a filly by Encosta de Lago) was one that Jamieson raced himself, winning at her only start.

It was certainly enough to earn Soorena a spot in the breeding barn for which she has rewarded her owner with, chronologically, a 7-time winner in Ra Ikane, the Singaporean Group placed The Rude Warrior and, Philippi (later Vanilla) who won a pair of Group Twos and was runner-up in the Australian Derby before a later stint in Hong Kong.

However, by the time Soorena’s Street Boss colt was being offered at the 2012 Inglis Melbourne Premier her only current attraction – Ra Ikane – was simply listed as a ‘winner’.

But it proved to be too much of a carrot for Griffiths and Ford and $120,000 later, she was heading to Griffiths Racing’s Cranbourne yard.

Named The Quarterback, this speedy son of Street Boss would not only add to the Jamieson honour roll, but would also become the first Group One winner for Griffiths.

Amid highly emotional scenes in the Flemington mounting yard for Griffiths & co., Jamieson had turned another page in history.

Luck? Well, it’s certainly of the extraordinary kind if it is.

Hoofnote: Just 20 minutes before the Newmarket, Rick Jamieson added another Group Two to the cabinet – but this time as part owner of Phar Lap Stakes winner Hattori Hanzo.